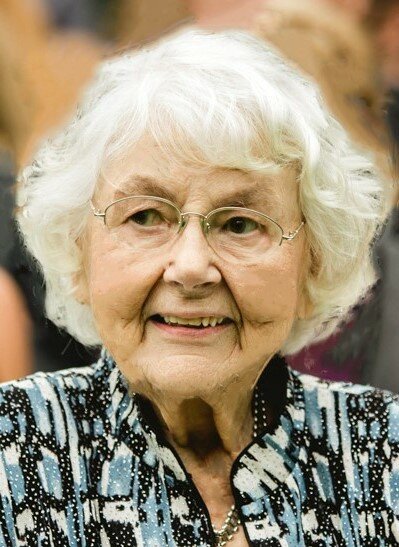 Germaine was born in Québec City, Canada on February 21, 1928, the second of Marie-Paule Langelier and Judge Joseph Achille Joli-Coeur’s twelve children.  Along with her parents and her husband, Bernard Tenney “Bud” Ellis, Jr., she is preceded in death by her siblings Philippe Jolicoeur, Gustave Joli-Coeur, Gabrielle Joli-Coeur Harvey, Thérèse Joli-Coeur Couture, Pierre Joli-Coeur, Henri Joli-Coeur, Louise Joli-Coeur, several in-laws, and most of her long-time friends.

When she was preparing to enter the seventh grade in Québec City, her father broke the news to her that there would only be enough funds to send the boys to private school and onward to university. At age 16, feeling like she’d maxed out the meaningful educational opportunities that were available to her, she joined the workforce as a bilingual secretary.  When a job was posted at the newly opened Québec Government House in New York City in 1947, her father encouraged her to apply, figuring it was a way to address his daughter’s frustrated ambitions while still being able to maintain some level of oversight.

Alone in the Big Apple at age 20, Germaine was delighted to accept a dinner invitation from a family friend and fellow ex-pat who lived in suburban New Providence, NJ with his family.  Also at the dinner table was his co-worker and carpool mate from the neighboring town of Summit, Bud Ellis. Some of Bud’s corny jokes elicited Germaine’s signature high-pitched laugh--and some did not--but either way, she became a reasonably willing audience for them for the next sixty years.   Bernard T..Ellis, Jr. and Germaine Jolicoeur were married at the Basilique de Notre Dame in Québec City on February 4, 1950.

For the next thirty-five years, Bud and Gerri made their home in nearby Madison, NJ where they raised five children and put them all through college.  Gerri spent almost twenty years as a full-time homemaker but kept her ties to the adult world through close-knit sets of neighbors on both Maple and Noe Avenues, her volunteer work with the Junior League of Morristown, as well as successfully testing to join Mensa.

But her intellect yearned for more, and in 1968 when her youngest child was out of diapers, Germaine returned to the workforce at the Canadian Consulate In New York.  She came to realize that her job running the library there carried lots of responsibility, but thanks to her limited educational credentials, little authority or opportunity to advance.  She began having the same bittersweet feelings watching her oldest sons go off to college as she had when her brothers did the same. With the full support of her husband and with her children feeling no less scrutiny of their behavior, she added to her full-time work schedule by enrolling in night school at Fairleigh Dickinson University where she obtained her bachelor’s and MBA degrees.  Her first job after graduation was working for the State of New Jersey in New Brunswick and Newark as a labor market analyst. Germaine then returned to her roots at the Québec Government House in New York, which by then had greatly expanded in scope and was now referred to as the “Delegation du Québec.”  She served as a commercial attaché for several years, and was responsible for finding US distribution for Québec producers of fashion, furniture, home goods, giftware, commercial art, B2C foods, and other categories.  This was extra challenging since Cirque du Soleil and Celine Dion had not yet emerged to lend their gusting tailwind to the Québec brand.

When her husband retired, he oversaw the renovation and enlargement of their summer home in Sea Girt, NJ, where they moved full-time in 1985.  After still commuting to New York and pursuing some entrepreneurial opportunities for a few years, she finally joined him in retirement, and thrived on hosting her children, grandchildren, huge extended family, and a lifetime’s collection of close friends for memorable visits to the Jersey Shore.  Her writing and research skills were also seized upon by the Monmouth County Genealogical Society, where she was editor of the monthly newsletter and chaperoned several group trips to help people explore their roots in New France.

Twenty years later, as the shore house and their mobility showed signs of wear and tear, Gerri and Bud accepted their daughter Natalie’s invitation to relocate with her to Richmond, Virginia, and occupy their own private apartment in the Monument Avenue mansion she was renovating. After Bud passed away four years later, Gerri moved on her own back to New Jersey where she progressed through a couple of assisted living facilities. Her lifelong restless leg syndrome and mild vertigo issues were incompatible with her aging body, causing several falls. But they were not a sign of weakness, as Gerri powered through the ensuing bone repair and hip replacement surgeries and recoveries.

But in her nineties, coming as somewhat of a surprise to her family, her brilliant mind began a steep decline. To accommodate her changing needs, she spent her final few years in a Brandywine Memory Care Residence in Colt's Neck, not far from where her daughter Natalie had also resettled at the Jersey Shore when she retired. She received respectful, dignified care there, and enjoyed frequent visits from her children, but still lamented having become a "useless person." Nonetheless, she was an active participant in the activities there, and her mood was also buoyed by welcoming the arrivals of four great-grandchildren. Germaine passed away on August 28, 2022, after having called each of her children to her bedside for a kiss. She had forgotten how to speak English in those final hours, but as usual, she made herself well understood.

A Mass of Christian Burial will be held at 10:00 AM Saturday, October 15 at St. Vincent Martyr Church, Madison.

Interment of her cremated remains next to her husband’s will follow at Fair Mount Cemetery, Chatham.

As an alternative to flowers, charitable contributions may be made to The Alzheimer's Association., 25 N. Michigan Ave., Fl. 17, Chicago, IL 60601.

Share Your Memory of
Germaine
Upload Your Memory View All Memories
Be the first to upload a memory!
Share A Memory