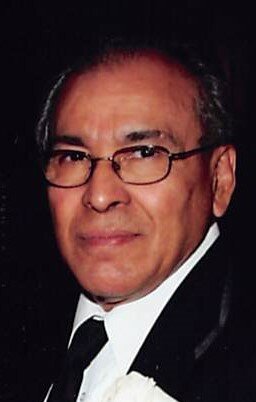 Oscar Gonzalo Huezo, of Madison, formerly a longtime North Bergen resident, passed away peacefully on Sunday, October 3, 2021 at the age of 72.

Oscar was born on March 14, 1949 in Mejicanos, El Salvador to the late Rigoberto Cuellar and Graciela Huezo. Oscar’s father passed away when he was very young.

Oscar immigrated to the United States in 1972, arriving first in the Bronx, and then moving to Fort Lee. While in Fort Lee, Oscar met the love of his life, Ana Amalia Huezo (née Castro) through mutual friends at a party. The two became inseparable, marrying on March 14, 1980, and settled in North Bergen to raise their family. Oscar moved to Madison 2 years ago to be closer to his children.

Oscar was a kind, generous, and playful man with a wonderful sense of humor. He loved making people laugh and being the center of attention, especially at parties. He also enjoyed music and dancing. Oscar was a man of great Catholic faith and regularly attended mass at St. Vincent Martyr Church in Madison. Above all, Oscar adored his family, especially his grandchildren.

In addition to his parents, Oscar was preceded in death by his brother, Alfredo Huezo, and his sister, Zuleima Dominguez. He is survived by his beloved wife of 41 years, Ana Amalia Huezo; one son, Carlos Castro; three daughters, Carol Huezo-Ahmad, Alexandra Huezo-Benitez & Sandra Yesenia Huezo; one brother, Mauricio Dominguez; one sister, Sandra Huezo; four cherished grandchildren, Gabriella, Mateo, Juliana, and Rafael; and many nieces, nephews, cousins, and dear friends.

Relatives and friends are kindly invited to attend a visitation to celebrate Oscar’s life from 4:00PM to 8:00PM on Thursday, October 7, 2021, held at the Madison Memorial Home, 159 Main Street, Madison. A Liturgy of Christian Burial will be celebrated for Oscar on Friday, October 8, 2021 at 10:30AM at St. Vincent Martyr Church, 26 Green Village Road, Madison. For those that wish, you may attend the Funeral Mass virtually via livestream by visiting www.svmnj.org *For the safety of all, the family kindly requests that all those attending the visitation and funeral services wear a mask regardless of vaccination status. Interment will be held privately for the family.

In lieu of flowers, charitable contributions may be made in Oscar’s memory to the Alzheimer’s Association, 225 N. Michigan Ave. Floor 17, Chicago, IL 60601.

Share Your Memory of
Oscar
Upload Your Memory View All Memories
Be the first to upload a memory!
Share A Memory