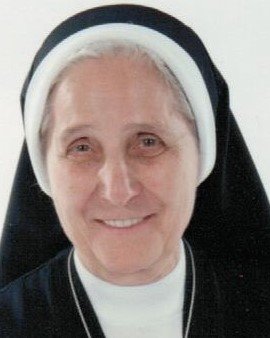 Sr. Josephine Di Guida, of Florham Park, was called home to the Lord suddenly after a fall in the Convent on Saturday, December 14, 2019, later passing at Morristown Medical Center. She was 95.

On June 9, 1924 the late Giovanni and Giovanna Di Guida of Mugnano, Naples, Italy were elated when their first child, a baby girl, was born. They named her Josephine Di Guida in honor of St. Joseph, their favorite Saint. Josephine’s birth was followed by the birth of six brothers.

As a young girl, Josephine did not have time for dolls or to indulge in conversation with other children her own age. She was needed to help her mother care for her siblings. This was a full-time job and she had to mature quickly. In spite of her enormous responsibilities, she always found time to attend church and seek guidance from God. Just like any other girl her age, she had dreams of the future, but she simply did not have time to cherish them.

When Josephine was 16, her mother finally gave birth to another girl they named, Santina. Josephine was happy, not only because she had a sister, but because she felt relieved, to a certain degree, from the responsibilities of the family. Now she felt that she was free to seek fulfillment of her dreams.

One day, a group of Passionist priests came to her town to preach a Mission. She was both fascinated and moved by their strong message on commitment, perseverance, and future life. As she continued praying she felt that something was becoming more clear in her mind and soul.

Sr. Josephine received the divine call to her vocation and entered the first profession of her regular vows on August 14, 1946.

On July 13, 1967 she was sent by her superiors to the United States. She became Superior of the first community of the Vocationist Sisters in Newark, NJ.  On December 25, 1989, Sr. Josephine was transferred to Florham Park, NJ to a new assignment as teacher of the nursery school at the Vocationist Sisters, where she remained until her passing. Sr. Josephine had a warm, caring disposition and loved teaching. She was especially talented teaching preschool age children, who she taught throughout her entire life. Even in her advanced age she loved to assist and take part in teaching at the nursery school. Generations of children will forever remember Sr. Josephine.

May she Rest in Peace.

All are warmly invited to attend the visitation of Sr. Josephine, Thursday, December 19, 2019 from 5-8PM at the Vocationist Sisters Convent Chapel in Florham Park NJ.

A Funeral Liturgy will be held at 10:00AM on Friday, December 20, 2019 at the Vocationist Sisters Convent Chapel, 88 Brooklake Road, Florham Park, followed by entombment at Gate of Heaven Cemetery, East Hanover, NJ.

Funeral arrangements are in care of the Madison Memorial Home.

Share Your Memory of
Sr. Josephine
Upload Your Memory View All Memories
Be the first to upload a memory!
Share A Memory
Plant a Tree