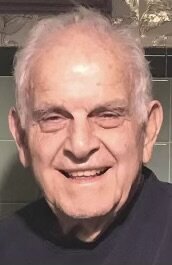 Dominic M. Cardarella, a longtime resident of East Hanover, entered into eternal rest peacefully on Tuesday, February 22, 2022 at Morristown Medical Center. He was 93.

Dominic is survived by his beloved wife of over 70 years, Elizabeth “Betty” Cardarella (née Iradi) of East Hanover; his daughter, Joanne Cardarella Chirico of Madison; his granddaughter, Betty Chirico Pumphrey and her husband, Kevin of Montague; and many loving members of his extended family and dear friends.

Dominic was predeceased by his brother, John Cardarella; his sister, Rose Cochario; and his son-in-law, Vincent D. Chirico.

Dominic was born in Madison on January 21, 1929 to the late Carmine and Rafaele Cardarella. He was raised in Madison with his brother and sister. Dominic was a graduate of Madison High School, where he excelled in football and was a member of the varsity league. He attended Pace University in New York City after high school.

He first met his beloved wife Betty when the two were in high school, and they have been together since. The couple settled in East Hanover where Dominic established his company, Dominic Cardarella Construction.

Dominic was a wonderful husband, father and grandfather. He dedicated his life to his family and was a devout Catholic. Dominic was a parishioner of St. Vincent Martyr in Madison growing up, then became a longtime and very active member of St. Rose of Lima Church in East Hanover with his wife Betty, where he was a member of the Knights of Columbus.

In his retirement, Dominic enjoyed traveling with Betty to the Caribbean and throughout the United States. He especially enjoyed the time he spent in Rio de Janeiro. For many years Dominic was an avid bowler and an active member of the East Hanover Senior Citizen’s Club.

Dominic will be deeply missed. His family is grateful for the wonderful memories they have of Dominic and the legacy that he leaves behind.

Funeral services will begin at 9:00AM at the funeral home on Monday, February 28, 2022 followed by a 10:00AM Liturgy of Christian Burial celebrated at St. Rose of Lima Church, 312 Ridgedale Ave, East Hanover. For the safety of all, we respectfully require all those attending the visitation and funeral services to wear a mask.

Interment will follow at Gate of Heaven Cemetery, East Hanover.

In lieu of flowers, the family has asked that you please consider a charitable contribution in Dominic’s memory to the East Hanover First Aid Squad, 554 Ridgedale Ave, East Hanover, NJ 07936.

Share Your Memory of
Dominic
Upload Your Memory View All Memories
Be the first to upload a memory!
Share A Memory