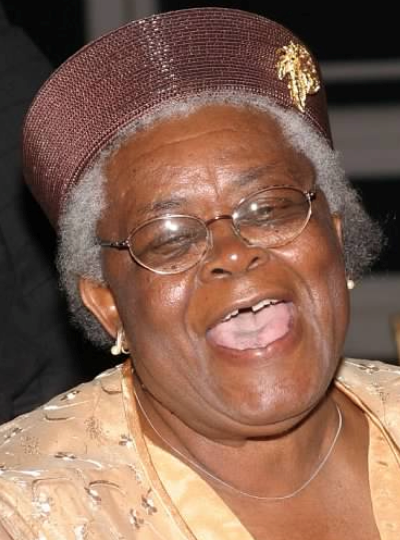 Muriel was born in 1933 in Bethel Town, Jamaica, to the late Frankie Barrett and Elsie Paisley. Nicknamed Waxy, due to her slender physique like a wax doll, she was the fourth of five children, and the only girl for many years. When Elsie moved to Kingston, Muriel and her siblings were raised with the help of her grandparents, “Papa Henry” Paisley and “Granny Mimi,” (Amy) Paisley. Muriel’s father chose to move to Montego Bay to seek better employment opportunities at that time. Later, Muriel would live with her Aunt Ursula. She flourished while working at her aunt’s business selling products and goods. She later joined the Anglican Church and was mentored by Bishop Mr. Swaby. She enjoyed the church and found the pastor was very inspirational. She often spoke of the church and the pastor's guidance. She was very devoted to her faith and the church. So much so that she even joined the church choir. Her voice was angelic and could touch a soul. As a child and a teenager, she enjoyed cooking and also developed a passion for dress design which led to her lifelong vocation as a seamstress. She was a great talent and learned her early skills as a seamstress from her mother and the other women in her town. Eventually, Muriel went to school for dressmaking. She further refined her talents under her mentor, Ms. Mahfood’s instruction where she learned designing fundamentals such as sewing and cutting. Her dress design aesthetics were unique, and she produced garments that were cutting edge and ahead of their time. She took her craft very seriously and was a perfectionist. She loved designing and would often work late to hone her craft and to outdo her previous creations. Her clients loved and admired her work and could not wait for her next unique design. Her skills, talent, work ethic, and popularity allowed her to become a business owner. Though Muriel had no formal education, in her twenties Muriel’s work ethic made her an accomplished female entrepreneur in her twenties. At different times in her career, she owned three different shops located on Red Hills Road, White Hall Avenue, and Uden Street, Jamaica.

In her twenties, she met and married Kenneth Alexander Bonfield, and the couple had two children, Nyanda (Jennifer, Gigi) Bonfield and Kenneth George (Barrington, Barry) Bonfield. When her husband Kenneth left for England, she raised her children with the help of her family. Because her children’s education was extremely important to her, she continued to work hard to afford a good education for them. She eventually enrolled them in a private Catholic school to ensure that her children had the best academic opportunities possible. Her efforts and dedication allowed her son to study accounting and her daughter to study business management. To provide her adult children, who now had their own children even more opportunities, she made the difficult decision to leave Jamaica in the early 1980s and move to the United States with the intention of them joining her one day. She arrived in the United States in the early 80s. At first, she lived with her sister, Althea, and brother Harold, in Massachusetts. She later relocated to Boca Raton Florida where she began a new career path as a home health aide provider. She would live there for a few years before moving to Morristown, New Jersey, with her cousin Marion Williams. While establishing herself in the United States,  she never forgot her goal of bringing her children to the States. The joyous occasion came to fruition when her two children and three grandchildren Kamaur, Kenisha, and Hanif migrated to the U.S. between 1989 and 1990. Some of the expanding family lived in Queens, NY with her brother, Louis Lyons for a short time before moving to East Orange, NJ. Her appointment as a live-in nurse’s aid allowed her to learn about Madison, New Jersey. While working to care for her client, Virginia, she shared her concerns about the safety of her grandchildren. Virginia was compassionate about Muriel and her grandchildren's circumstances and allowed the family to stay with her from Monday to Friday. They would spend their weekends in their East Orange apartment on the weekends. Eventually, she would meet Lahunta Hurt, who would connect her to Madison, NJ’s Housing Authority that helped the family move into their own apartment on Prospect Street and eventually into 30A Community Place. Muriel was very grateful to live in Madison, New Jersey, because of the academic advantages that existed for her grandchildren. This fell right in line with one of her mantras, “Education is key.” Muriel herself chose to be a lifelong learner when living in Madison. Her tenacity and work ethic allowed her to earn her certification as a home health aid through the Bayada Home Care Company. She also took reading and writing classes, with Jessica Giorgio, at the Madison Public Library to become a better reader and writer.

Through the years she worked continuously and did her best to raise the second generation of her family while serving the elderly community in Madison and Chatham, NJ. She often would share how many miles she would walk to arrive at her job. Though she was a devoted caregiver, Muriel never forgot her passion for dressmaking. She would often adjust hems and make alterations for her friends and acquaintances. Most of all she enjoyed making dresses for her great-granddaughters. She practiced her talent up until the last days of her life. Many of those dresses will be cherished and handed down to the next generation of family members. Another one of Muriel’s pastimes was listening to music on her record player. She would care for them so well that most of them are un-scratched to this day, though she bought them decades ago. She also enjoyed going out to tea, visiting local garage sales with Mrs. Hurt. On those drives, they would find many treasures that some considered trash along the streets of Madison, NJ.

As Muriel approached retirement age, she welcomed her second granddaughter and fourth grandchild, Sharela, to the States. She once again did her best to care for her grandchild and awarded the same opportunities to her as she had for her first three grandchildren. When she reached retirement age she discovered that she had not worked enough years to receive Social Security benefits. It was then that she was employed by the Madison, NJ Public School as a food service worker at Central Avenue School. Some of the children still remember her as the lady that would give them extra chicken nuggets. Eventually, she retired and began volunteering at the Madison Senior Citizen Center where she would help with voter registration and collate letters that shared information with the community. When the family became concerned about her health and safety, she moved to Edison, NJ and lived with her daughter Nyanda. When Nyanda passed away in 2020, she stayed with her granddaughter Kenisha in Madison, NJ before moving to Queens, NY to live with her son Kenneth where she eventually passed away

Muriel was candid and took a stern, no-nonsense approach to life. She never hesitated to speak her mind. At times, she could be fiery and uncompromising, but it was always rooted in love. She was a great cook and baker like her mom and enjoyed making corn muffins, and cornmeal or sweet potato pudding. She was a dependable daughter, sister, mother, grandmother and friend. She was a great storyteller who loved to share old family recipes and talk about her family history. Often, her stories were told with hilarity. The hearer couldn’t help but laugh because of her infectious laughter. She was proud of her Jamaican heritage and enjoyed passing down these stories to her grandchildren and great-grandchildren, who she was tremendously proud of. Muriel regularly kept in touch with family and friends back in Jamaica and all over the US by copying prayers that she received from Life Study Fellowship and sending them in the mail. She loved selecting the best birthday, Easter, and Christmas cards and mailing them early with a special prayer and a little extra to buy something special. For this reason and many more she became a confidant to many. She was a fierce protector of her family and endured many ups and downs with them. Even though they often disagreed, she loved her family very much. Her absence has left a great void in their lives. She was deeply loved and will be deeply missed.

Relatives and friends are kindly invited to attend a visitation on Saturday, January 29, 2022, from 2:00pm to 4:00pm at the Madison Memorial Home, 159 Main Street, Madison. Following the visitation at 4:00 pm a celebration of Muriel’s Life, including eulogies and music will be held at the funeral home. For family and friends that are unable to attend, you may join us virtually by visiting Muriel's livestreamed services at 4:00PM. For the safety of all, we respectfully require that all those attending the visitation and service wear a mask regardless of vaccination status.

Muriel will be laid to rest in the family cemetery in Bethel Town, Jamaica.

In lieu of flowers, the family has requested that you consider charitable contributions in Muriel’s memory. Your contribution will go towards dressmaking courses for young ladies in her home country of Jamaica. Personal checks can be made out to Kenisha Tucker. Thank you.

Share Your Memory of
Muriel
Upload Your Memory View All Memories
Be the first to upload a memory!
Share A Memory