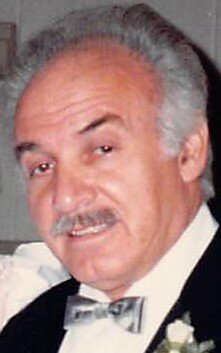 George Prassinos, a longtime Madison resident, died peacefully on Tuesday, December 14, 2021 at the age of 89.

George is survived by his two daughters, Anna & Maria Prassinos and a brother, Byron Prassinos and his husband, Oswald.  He loved living in Madison for over 60 years and had many dear friends here.

George was born in Kipseli, Athens, Greece on January 23, 1932 to the late Skarlos Prassinos and Anna Antiohis.  He was raised in Greece with his brother Byron and served in the Royal Air Force of Greece as a mechanic and flight engineer where he received two diplomas in Air Engines and Hydraulic Systems.  He then served for 3 years as a third engineer of Steamships in the Merchant Marines and received a diploma in engineering.

George emigrated to the United States from Greece and began his education and career in tool and die making.  At one point, he also owned and operated the Tin Lizzie Cocktail Lounge in Sayreville, NJ.  He then graduated from Lincoln Technical Institute in 1978 with a degree in Refrigeration & Air Conditioning.  George worked as a foreman at Ballantine Laboratories in Boonton and also at Strahman Valve Company in East Hanover for many years.  He eventually established his own tool and die business out of his home after retiring in Madison.  George was a master machinist and had an eye for detail and could fabricate complicated, intricate components from all types of metals and materials.

In his retirement, George kept active in his machine shop with his life’s work, and when not working, he loved the peace and solitude of the sea.  He was an avid fisherman and traveled frequently.  He mostly enjoyed sharing his knowledge of machines to all who wanted to learn.

Relatives and friends are kindly invited to attend a visitation held on Thursday, December 16, 2021 from 4:00PM to 8:00PM held at the Madison Memorial Home, 159 Main Street, Madison.

Funeral services will begin at 8:30AM on Friday, December 17, 2021 at the funeral home followed by a 10:00AM funeral service held at St. Andrew’s Greek Orthodox Church, 1447 Sussex Tpk., Randolph.

Interment will be held privately for the family.

In lieu of flowers, charitable contributions in George’s memory may be made to the Alzheimer's Association225 N. Michigan Ave., Fl. 17, Chicago, IL 60601

Share Your Memory of
George
Upload Your Memory View All Memories
Be the first to upload a memory!
Share A Memory