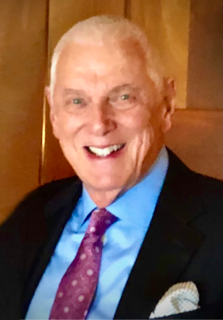 Paul Fitzpatrick, of Newport Beach, CA and Morristown, NJ, died peacefully at his home on Sunday, December 12, 2021 at the age of 81.

Paul was born and grew up in the Flatbush neighborhood of Brooklyn, NY, one of seven children.  He was proud of his roots and enjoyed sharing that he’d attended Erasmus Hall, with notable alumni such as Barbra Streisand and Neil Diamond.

Paul joined the Navy as soon as he could and served for two years active duty and four years Reserve.  He developed a love of flying and aircraft and thought to pursue a career as a commercial pilot after discharge.  Circumstances instead led him to join Dean Witter & Co., launching a successful career in securities operations on Wall Street.

Paul was recruited to Bank of America in San Francisco in the 70’s, where he later met his wife Maria.  They relocated to Los Angeles in the late 80’s when Paul joined First Interstate Bank and following this, Union Bank of California.  Leveraging his years of executive experience, Paul served as a management consultant advising banks and trust companies in securities operations.  After retirement, Paul supported Maria in a career venture that took them to the Washington, DC area before returning to settle back in Newport Beach, Calif.

Paul never lost his passion for flying, travel and adventure.  He and Maria visited Europe countless times, particularly Italy, which he loved more than any other places in the world.  They traveled to Australia, South America and Africa, and took several trips to various parts of Asia.  Paul became an avid Formula One racing fan of Team Ferrari and loved driving his 575 Maranello, sometimes terrifying his passengers. Above all else, he enjoyed sharing a fine meal and a nice red wine with good friends and family.

Paul’s devotion to our country was exceptional.  He was a genuine patriot who loved and believed in it deeply.

Paul is survived by Maria Fitzpatrick (Zanassi), his wife of 35 years; brother James (Maureen); sisters Mary (the late Rick) and Janice (Carl); nieces, nephews, grandnieces, grandnephews, his cousins in Italy and many cherished friends.  He was predeceased by his parents, John and Loretta (Forbes); sister Joan Wolf (Al); brothers, Thomas (Sally) and John; and his loving in-laws, Mario and Josephine Zanassi.

Relatives and friends are kindly invited to attend a visitation from 10:00AM to 11:00AM on Monday, December 20, 2021, held at the Madison Memorial Home, 159 Main Street, Madison. Following the visitation, a Liturgy of Christian Burial will be celebrated at 11:30AM at St. Thomas More Church, 4 Convent Rd, Morristown

Entombment with military honors will follow at Gate of Heaven Cemetery, East Hanover.

In lieu of flowers, contributions in Paul’s memory may be made to MD Anderson Cancer Center, P.O. Box 4486, Houston, TX 77210-4486 or www.mdanderson.org/gifts. Please ensure that your gift is designated to VDTCRC, a research fund for anaplastic thyroid cancer.

Share Your Memory of
Paul
Upload Your Memory View All Memories
Be the first to upload a memory!
Share A Memory