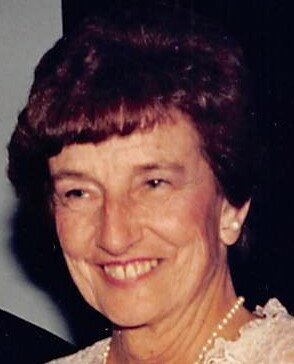 She was predeceased by her beloved husband of 51 years, Robert Wenneis in 1999; and her sister, Caroline Ruoff.

Jane was born to her parents Charles and Helen Storms on September 18, 1921. She was raised in Roselle Park with her sister Caroline. After graduating high school Jane was accepted to Connecticut College, which was a tremendous achievement for a woman in the late 1930’s. Jane graduated with her bachelor’s degree in 1943.

Jane first met Robert Wenneis after college and the couple were married in 1948. She worked at Macy’s in New York City and the couple had a studio apartment overlooking Central Park on the Upper West Side of Manhattan. They had an incredible life living in New York City. Jane and Robert eventually needed more space to raise their young family and moved to the suburbs, settling in Madison in 1951.

Jane had a rewarding a career of over half-a-century at Fairleigh Dickinson University in Florham Park. She was a beloved fixture of the university’s library department, where it was her responsibility for the ordering of books and other media for the college library. Jane made many wonderful friendships with her colleagues and enjoyed helping the students alike. She retired at age 82 and was honored for her fifty years of dedicated service. The college held a beautiful ceremony and reception in Jane’s honor at the mansion.

Jane loved Madison and always did her part to give back. She was heavily involved in many charitable organizations in Madison, such as the Thursday Morning Club, American Association of University Women (AAUW Madison Chapter) and the Public Library Board of Madison. Her most dear charity was the Madison Eagle Christmas Fund. For years Jane personally sponsored a family and made certain that Christmas was extra special for them, especially for the children.

Jane loved to stay active and was an avid walker. In her younger years, she and Robert were members of the canoe club and spent countless hours on area streams and lakes together.

At her recent 100th birthday her best and longest friend was able to attend. She had also recently turned 100 and the two women were friends since age 5. This speaks volumes for they type of person Jane was. Jane loved her family & friends deeply, and she treasured life. She never took anyone or anything for granted.

Jane will be deeply missed. She made her mark on the world and lived a beautiful, giving and vibrant life. She is now at peace.

A memorial service for Jane will be celebrated at 2:00PM on Saturday, December 11, 2021 at the Presbyterian Church of Madison, 19 Green Avenue, Madison. *For the safety of all, the family kindly requests that all those attending Jane’s services wear a mask regardless of vaccination status.*

Interment of Jane’s urn will follow at St. Vincent’s Cemetery, Madison. Arrangements are under the care of the Madison Memorial Home.

In lieu of flowers, please consider a charitable contribution in Jane’s memory to Eva's Village, 393 Main St., Paterson, NJ 07501. This is what she would have preferred.

Share Your Memory of
Jane
Upload Your Memory View All Memories
Be the first to upload a memory!
Share A Memory