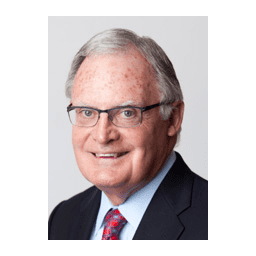 E. Michael Caulfield, a longtime Madison resident, died peacefully on Friday, October 22, 2021 at Morristown Medical Center with his beloved family by his side. He was 74.

Michael was born in Pittsfield, MA on December 28, 1946 to the late Thomas and Grace Caulfield, and was raised in Dalton, MA with his two sisters. Michael first met his beloved wife Helen during high school in Dalton and the couple were married on August 24, 1968.

Michael earned his bachelor’s degree from Colby College in 1968. After teaching a year of High School math, he volunteered and served in the United States Army as a first lieutenant, prior to his honorable discharge. From there, he would earn his master’s degree from Tuck School of Business.

Michael and Helen welcomed two sons into the family, Michael & Luke, and would raise them in Madison, which they would all call home for over thirty years.

In 2005, Michael accepted a new role serving as Chief Operating Officer and President of Mercer Human Resource Consulting until his re-retirement in September 2006.

Throughout his career Michael acquired a wealth of wisdom, knowledge, and experience in both finance and insurance. He had a great deal of senior leadership experience in finance, investments, and executive management in both the insurance and broader financial services industry. His operating background with large global businesses included responsibility for financial reporting oversight, risk management, and strategic planning.

Michael was also a dedicated volunteer who strongly believed in giving back to the community. In his retirement, he generously devoted a great deal of his time and professional skills to the Madison Area YMCA, serving on their Board of Directors for several years. His knowledge and experience was instrumental in the planning, fundraising, and completion of several YMCA projects, most notably its recent major addition. He was tremendously proud of the dedicated people he worked with at the YMCA. He felt they constantly inspired him to help any way he could.

Michael treasured his family and loved them deeply. His most important and proudest role was that of husband, father, and grandfather. An incredible Dad, he instilled in his sons the values of respect, hard work, and kindness. Michael was absolutely delighted to become a grandfather and loved spending time with his four grandchildren.

A longtime parishioner of St. Vincent Martyr Church, Michael was a man of profound faith. In his leisure time, Michael was an avid reader and enjoyed keeping active by walking and jogging around Madison.

Although there is a deep void in their hearts, Michael’s family and friends take solace in knowing that he is at peace, and has left behind an immeasurable and endurable legacy -- one of kindness and giving which will benefit his family, friends, and Madison for generations.

Relatives and friends are kindly invited to attend a visitation to celebrate Michael’s life from 4:00PM to 8:00PM on Friday, October 29, 2021, held at the Madison Memorial Home, 159 Main Street, Madison. Funeral services will begin at the funeral home at 9:00AM on Saturday, October 30, 2021 followed by a 10:00AM Liturgy of Christian Burial at St. Vincent Martyr Church, 26 Green Village Road, Madison. For those that wish, you may attend the Funeral Mass virtually via livestream by visiting www.svmnj.org. *For the safety of all, the family kindly requests that all those attending the visitation and funeral services wear a mask regardless of vaccination status.  Interment will be held privately for the family.

In lieu of flowers, the family requests that charitable contributions be made in Michael’s memory to the Madison Area YMCA at the following address: 111 Kings Road, Madison, NJ, 07940.

Share Your Memory of
E.
Upload Your Memory View All Memories
Be the first to upload a memory!
Share A Memory