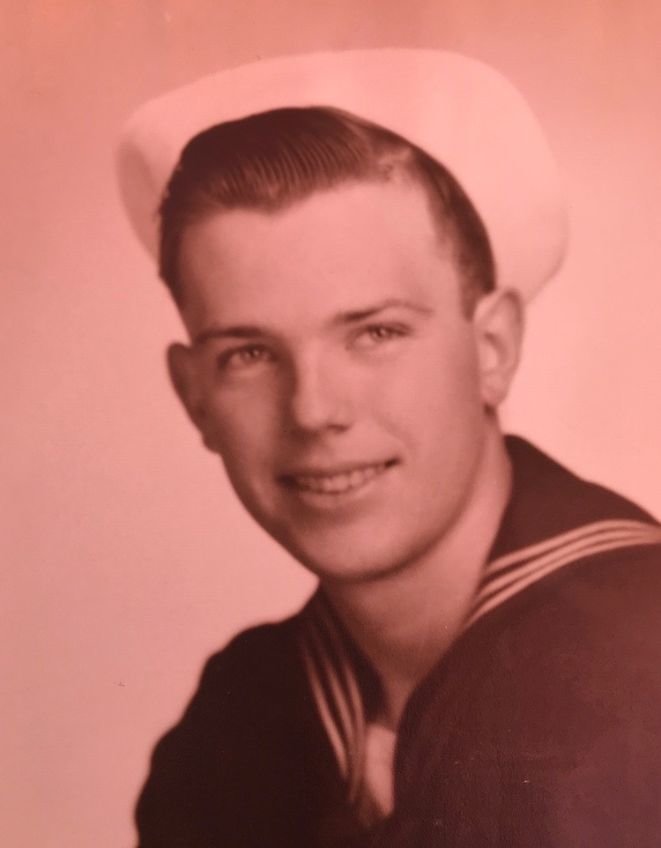 ANDREW “ANDY” JOHN STEIMLE of River Edge, NJ entered eternal rest on June 28, 2020 at the age of 94.  Born in Hackensack on January 5, 1926, he was the son of Andrew John and Clara (Gerber) Steimle. Andy grew up in Bogota, NJ and graduated from Bogota High School Class of 1944.

He was a proud veteran of World War II, enlisting in the US Navy prior to high school graduation. After completing naval training school he was assigned to the amphibious assault ship USS LSM 282 as a radioman.  Andy saw action throughout the Pacific Theatre, most notably the Battle of Okinawa and was part of the US occupation forces at Yokohama, Japan.

Shortly after his military discharge, he met the love of his life while waiting in line at the entrance to Palisades Amusement Park.  They married in June 1948 and lived in Leonia before moving to River Edge in 1965.

After the war, Andy began a career as a train dispatcher for the New York Central Railroad and worked for its successor railroads Penn-Central, Conrail and Metro-North Railroad before retiring in 1988. He was a volunteer fireman for 65 years with the Leonia and River Edge Fire Departments. He was also a member of the New Jersey State Fireman’s Association, the American Train Dispatchers Association and American Legion Posts 226 and 142.

Andy loved sports and was an avid NY Giants, Mets, and Knicks fan. He enjoyed traveling throughout Europe and the US.  His favorite vacations were with his family at the Jersey shore.  Andy had a passion for dancing, which earned him the nickname “Happy Feet”.

Andy will always be remembered for his friendly, outgoing personality.  He loved to tell jokes and enjoyed entertaining the seniors on bus trips to Atlantic City. But most of all he was a devoted husband, father, grandfather and great-grandfather who would do anything for his family.  He will be greatly missed by everyone who knew him.

Andy was predeceased on April 6, 2020 by his beloved wife of 72 years, Arline (Storch).  He is survived by his daughter Cheryl A. Templeton and her husband George of Chatham, NJ and son Andrew John Steimle and his wife Carol (Cox) of Mahwah, NJ.  He was the loving grandfather of Vanessa Templeton of Cranford, NJ, Ryan Templeton and his wife Rachel (Morris) of Chatham, NJ, Andrew J. Steimle of Mahwah, NJ and Kevin M. Steimle of San Diego, CA and great-grandfather of Summer and Trent (Templeton) Wallden.  Andy was predeceased by brothers Harry and Donald Steimle. He is survived by his beloved brother Kenneth Steimle and his wife Florence of Maywood, sister-in-law Dorothy Steimle of Franklin Lakes and many loving nieces and nephews.

Arrangements are under the direction of the Madison Memorial Home, Madison NJ.  To leave expressions of sympathy to the family, kindly visit www.madisonmemorialhome.com

Share Your Memory of
Andrew
Upload Your Memory View All Memories
Be the first to upload a memory!