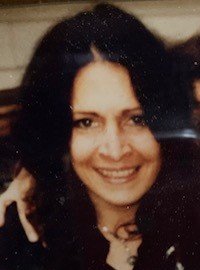 Nina "Laurie" DuBois, of Lake Hopatcong, died peacefully on Thursday, February 27, 2020 after a long illness. She was 69.

She bravely battled pancreatic cancer and was an inspiration to her loving family of friends.

Laurie was born in East Orange and lived in many places throughout her life.  A talented artist, she won awards for her unique works of art while in high school and was an art major at Syracuse University. Her inventive artistic talents were evident in her home décor, which was always as interesting as an art gallery.

Living an adventurous life before she became disabled, Laurie made many long motorcycle trips and had even been to England with her mother, Helen Harris, while a teenager.  An animal lover and a generous and kind soul, she was always ready to offer help to her friends, and even strangers. Her capacity for empathy was unrivaled and she’d worry if a friend had problems, and whatever she could do to help out, she was there to do.

Passionate about music, she had a large collection of albums and tapes, and in her early years attended as many concerts as she could. Once, she wrote to the original drummer of the Rolling Stones, Brian Jones, and received a wonderful hand-written reply, all this before they were the rock stars she knew they’d become.

The best nights out were dancing the night away to live bands in local places, and she was an amazing dancer. She seemed to become part of it as she allowed the music to flow through her.  Laurie was also an avid reader and was never without a current book she was reading.  She often shared a good one with a “chosen” sister, who always enjoyed Laurie’s recommended reading list as well as the books she shared.

She is survived by loving friends, those especially close being, Alfie Miners, and “chosen sisters”,  Cindy Bozeyowski, and Evie Esposito and her children, Leah, Frank, and 4 grandchildren, all of whom will miss her terribly even knowing that she is finally free of pain and is now with her beloved mother, Helen.

Charitable contributions may be made in Laurie's memory. She would want donations to go to an animal shelter of your choice in her honor.

Funeral services are being held privately and are under the direction of the Madison Memorial Home.

Share Your Memory of
Nina "Laurie"
Upload Your Memory View All Memories
Be the first to upload a memory!