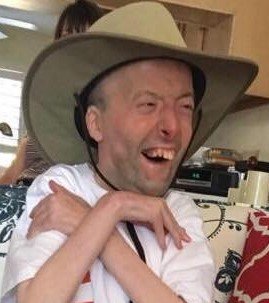 Michael Wayne Batliner, “Miracle Mike,” of Morristown was embraced by the arms of Christ to receive his crown on February 25, 2020. He was 38.

Michael was born on October 19, 1981 in St. Joseph, Michigan. Michael spent his early years attending Tradewinds in Northwest Indiana until 1990. He also spent many years in Lansdale, Pennsylvania attending school and participating in Special Olympics events. Michael would continually compliment the many beautiful and kind women who were his nurses throughout his many stints at the Children’s Hospital of Philadelphia with a “hubba hubba.” He would often offer to buy them a diamond ring followed by blowing them a kiss. Michael was also incredibly resourceful and would find great pleasure in using his hospital remote as a walkie-talkie. Michael graduated from Piscataway Regional Day School in 2003 and was the prom king of his class. He continued to share his joy and love of life in a variety of Special Needs day programs in Colorado, New York, and New Jersey.

Michael worked as a champion of pure joy, unconditional love, and compassion of other for 38 years. Michael was always more interested in others and how they were doing. Michael loved the simple joys in life, and among his favorites were communicating with walkie-talkies, watching Dukes of Hazard, Cops, and Walker Texas Ranger, listening to music, and talking “smack talk” with others while playing rounds of air hockey.

Michael loved to buy CD’s and had a collection that would rival the inventory of any FYE store. We as a family would like to offer our condolences to one of the last remaining CD & Record stores, Scotti’s of Summit, for their future loss in revenue.

Michael had a body that was built to hug, and he most certainly gave the best of them. He very often would even give them to himself out of excitement and joy.

Michael has made such an impact on the world around him and we have been blessed to have been touched, shaped, and molded by him. Michael most certainly was an inspiration and teacher for the 14,007 days that he was a part of this world. It is true that not all superheroes wear capes; he was ours.

A Celebration of Michael's Life will be announced at a later date.

In lieu of flowers, memorial donations may be given in Michael’s memory to the Tim Tebow Foundation at support.timtebowfoundation.org. Michael’s family wishes to thank the foundation for the remarkable gift and joy Night to Shine had provided him two weeks prior. It truly was a Night to Shine and that is what Michael did, shine.

So as our walkie-talkie angel bids adieu to this world we would like to say; it’s affirmative Michael, we have your handle and location. This is a 10-4 good buddy… over and out. Until we meet again.

Share Your Memory of
Michael
Upload Your Memory View All Memories
Be the first to upload a memory!