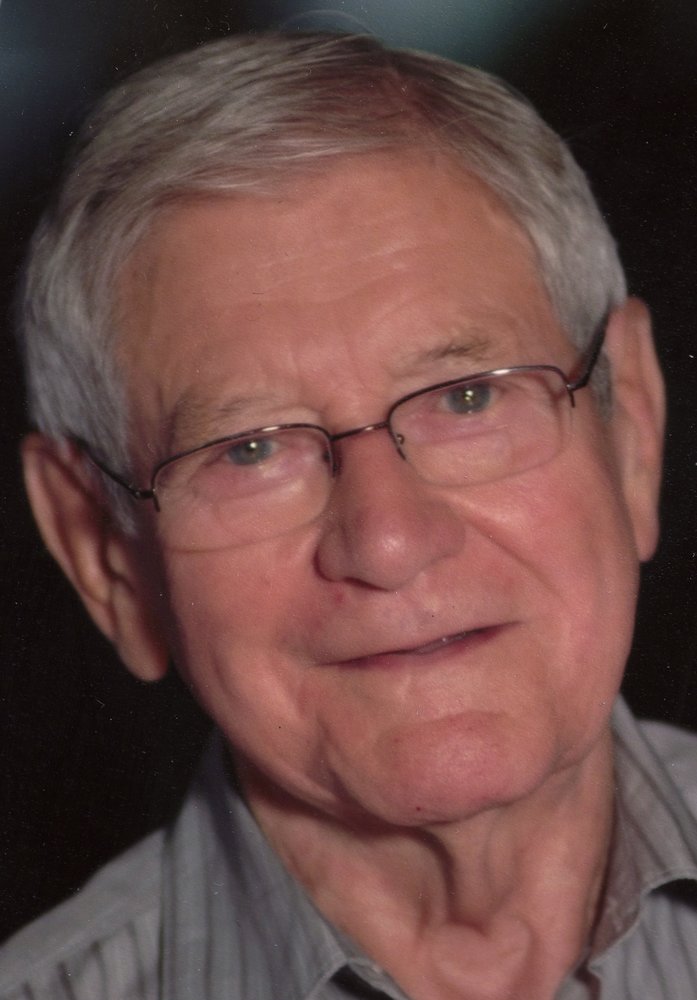 William Easton, a longtime Madison resident & former publisher of the Madison Eagle and Chatham Courier newspapers, died peacefully at his home on Saturday, February 22, 2020 with his family at his side. He was 96.

Born on April 10, 1923 in Hillside, NJ, Bill spent his early years in Elizabeth, graduating from Thomas Edison Vocational High School before he was called to duty in World War II. He served in the Army Air Force stationed in England at the height of the major European campaign. Once his basic training was complete, he sailed on the Queen Mary over to Europe in 1942. Bill served in the 447th Bomb Group & the 710th Bomb Squadron at Rattlesden Airbase, Rattlesden, England and was responsible for the critical repairs to B-17 Flying Fortresses and their weapons systems. After the European victory, he was waiting for deployment to the Pacific when war ended. Bill returned to the base and his 90th birthday, where he was gifted with special memorabilia by the present owners of the base, which now houses a glider club.

After the war, Bill returned home to Elizabeth and received a mechanical engineering degree from Newark College of Engineering, (now New Jersey Institute of Technology). While going to school, he traveled to Princeton University where he was a professor‘s aide in the psychology department.

Upon graduation he was employed in the advertising and marketing department of the Worthington Corporation of Harrison, NJ, where he met his wife, Louise. They married in 1962, while Bill furthered his career in advertising with the International Nickel Company of New York City.

In 1973, he and Louise purchased the Madison Eagle Newspapers and began a 25-year career as co-publishers of the newspapers, expanding them to include Florham Park and the Hanovers. As publisher and manager, Bill had a long and committed relationship with the local business communities, serving their needs, accepting their friendships, and joining with them and providing Madison the best local shopping district. He was a meticulous businessman, and in 1974 he initiated the popular Christmas Walk, bringing merchants and residents together on the Friday after Thanksgiving with in-store social gatherings with refreshments to preview Christmas offerings.

He was also an original member of the Downtown Development Commission as well as the Chamber of Commerce, and a longtime member of the Madison Rotary Club and the New Jersey Publishers Association, from whom the newspaper received numerous editorial and advertising awards. By 1991, when innovative computing invaded the newspaper publishing industry and family-owned newspapers were thriving, the Easton’s accepted an offer of purchase.

In dividing his time between Madison and New Providence, where he and Louise raised three sons, Bill was an active member of the New Providence Rescue Squad and enthusiastic sports involved father. He took up skiing, became a member of The New Providence Ski Club, skied here and abroad, eventually settling in Peru, Vermont for skiing in the winter and cycling in the summer. He and Louise became permanent Madison residents in 1984.

After he retired, Bill became an avid cyclist, and enjoyed yearly rides with RAGBRAI across Iowa, with his beloved friends, the Garreffa family. He used his engineering skills to build his own bicycle and, for many years, for his entire family. He also joined the Bell Labs Pioneers volunteers in repairing children’s bicycles and contributing them to urban children. As an ardent traveler, Bill fell in love with Italy and made yearly trips to the country for 30 years.

Relatives and friends are kindly invited to attend a visitation on Monday, February 24, 2020 from 7-9PM and on Tuesday from 2-4PM & 7-9PM at the Madison Memorial Home, 159 Main Street, Madison. Funeral services will begin on Wednesday at 9:00AM at the funeral home, followed by a 10:00AM Liturgy of Christian Burial celebrated at the Shrine of St. Joseph, Stirling. Entombment with military honors will follow at Gate of Heaven Mausoleum, East Hanover.

In lieu of flowers, charitable contributions may be made in Bill‘s memory to the Tony and Vicky Martel Legacy Fund, in honor of the Madison residents who created the national T.J. Martell Foundation in memory of their son who died of leukemia in 1973. Contributions may be sent to https://donate.tjmartell.org/give/108868/#!/donation/checkout

For further information or to leave an online condolence message, please visit www.madisonmemorialhome.com

Share Your Memory of
William
Upload Your Memory View All Memories
Be the first to upload a memory!