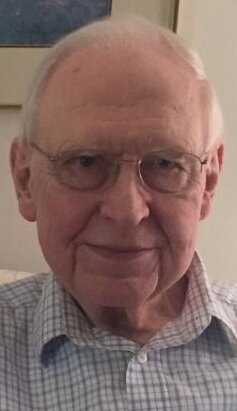 Roy D. Mueller, a longtime Madison and former Ironwood, MI resident, passed away peacefully on Monday, January 9, 2023. He was 91.

Roy was preceded in death by his parents; his beloved wife of 66 years Nancy Mueller (née Stenstrom), one brother, Charles Mueller; one sister, Marilyn Whitney; and his daughter-in-law Esther Mueller.

Roy was born in Bessemer, Michigan on October 14, 1931, to the late Leo and Agda Mueller (née Nyberg) and was raised in Ironwood, Michigan. Roy enlisted in the United States Navy after high school and served his country for four years. Upon his honorable discharge from the Navy, Roy returned to Ironwood and married the love of his life, Nancy, on June 19, 1954.

After the birth of their first child, Sharon, Roy moved the family to Ann Arbor where he attended the University of Michigan and completed the Bachelor Degree in Pharmacy program and in 1960 the family of five then settled in Warren, Michigan. He continued his work in the pharmaceutical industry working as an independent pharmacist as well as with Henry Ford Hospital and Parke Davis & Co. In 1979 he was transferred to Madison, NJwhere he worked with Warner-Lambert of Morris Plains, NJ then Kern-McNiel until his retirement in 2005. Retirement brought Roy and Nancy to Valley Forge, PA for fourteen joyful years. Roy moved back to Madison, NJ in 2020 after the death of his beloved Nancy.

Roy was a quiet and soft-spoken family man who enjoyed reading and music. He was blessed with a beautiful baritone voice and sang with the Windsor Light Opera Company of Windsor, Ontario while living in Michigan. He sang with numerous church choirs including St. Stephen Lutheran Church (Warren, MI) and the Gloria Dei Lutheran Church (Chatham, NJ). Above all, he was a wonderful father, grandfather, and friend, and will be deeply missed by all who knew and loved him.

Services for Roy are being held privately for his family under the care of Madison Memorial Home.

In lieu of flowers, charitable contributions may be made in Roy’s name to Gloria Dei Lutheran Church, 300 Shunpike Rd, Chatham Township, NJ 07928 at https://www.gloriadeichatham.org/give-online/

Share Your Memory of
Roy
Upload Your Memory View All Memories
Be the first to upload a memory!
Share A Memory