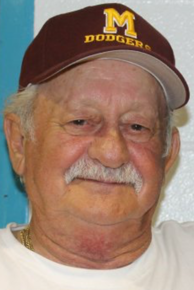 Anthony Charles Curto, Sr. "The Bus Driver", "The Witch", a lifelong Madison resident, died peacefully surrounded by the love of his family on Monday, November 18, 2019. He was 83.

Tony was born to the late Charles and Mary Curto (nee Bocchino) on June 10, 1936 in Bloomfield. He was raised in Madison and was a lifelong resident. He was married to his beloved wife of 51 years, Nancy Curto (nee Small) on November 25, 1967. The couple first met at Seymour’s Luncheonette in Livingston and the rest was history.

Tony was an active supporter & dedicated fan of all Madison sports, and he was especially well known for his assistance with working the chains during Madison High School football games. Tony could be frequently found on the sidelines of most games when he was not working to show his support. Prior to retiring in 2012, Tony was a bus driver for 26 years with the Madison Board of Education. He was as reliable and dependable as they come and will be fondly remembered by several generations of students.

Tony was a kind-hearted, genuine man with many friends. He could be spotted frequently throughout Madison and was always happy to spend time with friends, both old and new, in conversation. He was a regular poker player and an avid NY Giants fan. Tony adored his golden retrievers and he recently added an adopted cat to the mix. He was also a longtime member of the North Stars Italian American Club.

In addition to his parents, Tony was predeceased by his sister, Mary Ann Curto. He is survived by his beloved wife, Nancy Curto (nee Small) of Madison; his sons, Anthony Curto, Jr. and his wife, Veronica of Roxbury & Charles Richard Curto of Morris Township; his daughter, Nancy Curto Peralta and her fiancé, Richard of Madison; his son, Paul Parr of East Hanover; his sisters, Frances Sands and her husband, Boyd of Cape Canaveral, FL & Joanne Hughes of Melbourne, FL; 4 cherished grandchildren, Anthony, Joseph, Hunter & Trevor; and many dear friends.

Relatives and friends are kindly invited to attend a visitation to celebrate Tony’s life on Sunday, November 24, 2019 from 1:00PM to 5:00PM at the Madison Memorial Home, 159 Main Street, Madison. Funeral services will begin at the funeral home at 9:00AM on Monday, November 25, 2019, immediately followed by a 10:00AM Liturgy of Christian Burial celebrated at St. Vincent Martyr Church, Madison. Interment will follow at St. Vincent’s Cemetery, Madison.

In lieu of flowers, charitable contributions may be made in Tony’s memory to one of the following:

Share Your Memory of
Anthony
Upload Your Memory View All Memories
Be the first to upload a memory!